Why The Versatile Fabian Delph Is Ideal Pick For England

Fabian Delph, who emerged as one of the bookies’ favourites to make Gareth Southgate’s World Cup team weeks before the England manager named him in his 23-man squad, is an ideal pick for the national team. Several of Southgate’s choices give him flexibility, Delph being one of them. But the Man City star also boasts the sort of needed experience in Russia (as well as Pep Guardiola’s backing).

Delph started his career at Leeds United before the West Yorkshire club’s failure to gain promotion from League One prompted several Premier League clubs to show interest in the man from Bradford. Aston Villa signed him in 2009 and he enjoyed six years at the club, earning his first England call in 2014 for a Euro 2016 qualifier against Switzerland. He signed for Man City in 2015 for a reported £8 million.

That, crucially, has given him a taste of success at the highest level. That’s a huge plus for a player on the biggest stage. Man City’s canter to the Premier League title was the result of the tactical genius of Pep Guardiola, who harnessed the individual skills of very talented individuals and Delph was part of that. His versatility helps, of course, but 22 appearances including a goal shows he’s a player the manager thinks highly of.

Luck played its part. Benjamin Mendy’s injury opened the door for Delph at left back and he took his opportunity. That’ll please England manager Gareth Southgate who will hope for the same if he hands him a starting spot in the England team. Indeed, Delph played a key role in City’s record-breaking start to the season, his goal against Crystal Palace helping the team to an incredible 18 consecutive wins. 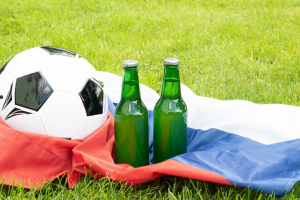 While he’ll never get the back page headlines in the same way as teammates Sterling, Bruyne and Aguero. Fabian Delph is one of Guardiola’s most reliable performers. His flexibility allowing him to switch to a defensive midfield role if required.

And it’s that flexibility that helped make Delph one of the favourites to join the squad bound for Russia long before Southgate revealed his final 23. The head coach will likely stick to a formation that has served him well during his short time in charge of the national team, as a back three, each reliable on the ball, are flanked by right and left-sided defenders who know how to get forward. Delph’s performances as a wing-back and midfielder make him an ideal choice. He’ll also be able to slot into the middle if an injury causes a change or Southgate switches tactics.

He’s also got Guardiola’s backing. The manager told Talksport that Delph is not only a player who offers the manager the opportunity to change things during a game, be that tactics or formation – he also encourages pace and movement through his ability on the ball.

Delph might not grab the headlines in Russia, but he offers the England team versatility as well as experience. He also adds competition at left-back. A position that could see Danny Rose, Ryan Bertrand, Ashley Young or Delph himself occupy.