Teams with something to prove at the World Cup

The World Cup comes around once every four years.  A poor showing from a team isn’t soon forgotten by fans. That’s especially true for these teams, who arrived in Russia with a chip on their shoulders. Will the pressure be too much, or will they rise to the occasion?

Teams with something prove: Belgium

Perhaps no team is under as hot a spotlight in Russia than this talented Belgian squad. In Brazil last time around, the quarter-finals was seen as a reasonable achievement for this golden generation of talented players – but this year, that simply won’t cut it. In Kevin De Bruyne and Eden Hazard they have two of the Premier League‘s best players, and there’s no obvious weak spot in the team. The question is how they will fit into Roberto Martinez’s 3-4-3 system, and whether they can seize their moment on the big stage – which they haven’t managed in recent tournaments.

In a country that expects success and nothing else, failing to make a World Cup final in your own country is bad enough. To do so by losing 7-1 makes matters a little worse – and Brazil know that only a record sixth trophy will avenge those memories. They’re well placed to do it – manager Tite has rejuvenated the set-up and the team breezed through qualification. They won’t be tested too much in their group, but the real challenges will come later on. Bookies and pundits reckon there’ll be up to it; the latest world cup 2018 odds have them as favourites to bring the tournament home.

As far as tournament preparations go, sacking a manager two days before your opening game isn’t exactly textbook. That’s what Spain have done, though, and their group of ludicrously talented players will be keen to prove that they’re still capable of hitting the heights expected of them a few days ago. Isco is emerging as a national star. Marco Asensio is a tricky young winger who gives this team a dynamic option off the bench. There are question marks at striker, though, with Diego Costa shoehorned into an otherwise free-flowing system. Hothead captain Sergio Ramos will need to keep his cool to ensure his squad don’t suffer. 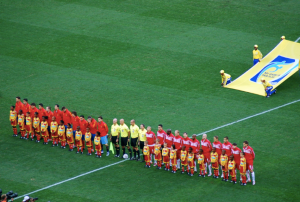 They have possibly the greatest player of all time in their team. Yet Argentina have built something of a reputation for choking on the big stage. Incredibly, Lionel Messi has lost all four of the major finals he has competed in with his national team – three Copa America defeats to go along with the heartache suffered against Germany in the 2014 World Cup. There’s no doubting the Barcelona star’s ability. His teammates need to prove that they can match his intensity under the spotlight and a long-awaited World Cup victory would certainly achieve that goal.

The festival of football unfolding in Russia will capture eyeballs across the world. For these teams, there’s some serious business to be achieved later in the tournament.