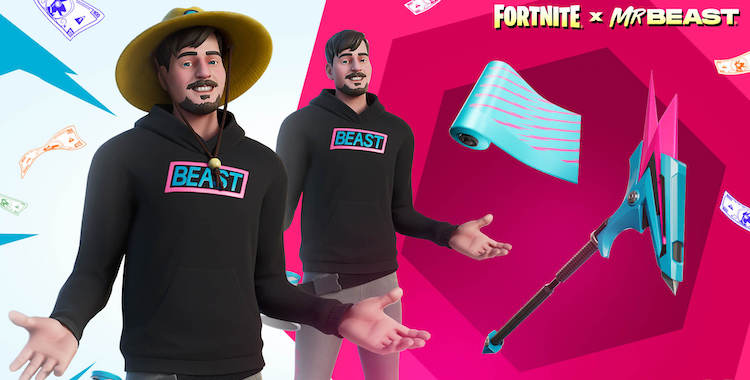 A fun collaboration: it is possible to wear a outfit from MrBeast in Fortnite! The game announced the collaboration on Monday afternoon. Nice extra: there is a lot of money to be made.

Nope, it’s not clickbait! This is REALLY happening.@MrBeast in Fortnite.

Fortnite (Battle Royale) is a free online survival game in a cartoonish drawing style, where you have to be the last one standing on an island. Fortnite is in the top 3 of most popular E-Sports games. You can play it alone, in pairs or in a team of four. The game is very popular with children and is known for the many fun emotes (dances). When you hear someone talk about Fortnite, it’s most likely about Battle Royale. That’s the free multiplayer version of the game and by far the most popular way to play Fortnite. In Battle Royale you are dropped alone or with your ‘squad’ (your team) on an island, with a total of 100 islanders. The goal is to be the last to survive by shooting other players. As being one of the biggest games in E-Sports it’s also a good place for your free bets.

MrBeast is one of the most famous YouTubers in the world and is known for giving away a lot of money. The winner of a special game mode receives 1 million dollars! Check out how MrBeasts’s Extreme Survival Challenge works here. MrBeast can now call itself the largest YouTuber in the world with more than 112 million subscribers. Since 2013, that title belonged to PewDiePie, but MrBeast has now overtaken it. MrBeast’s real name is Jimmy Donaldson and he started his main channel in 2012. In his videos, he often gives away money and prizes through contests and stunts. For example, he raised more than a million euros with a football match, planted 20 million trees and gave 500,000 euros to the last person to leave a circle. At the end of July, MrBeast reached 100 million subscribers. A live stream showed him waiting nearly half an hour for his channel to jump from 99,999,999 subscribers to 100,000,000.