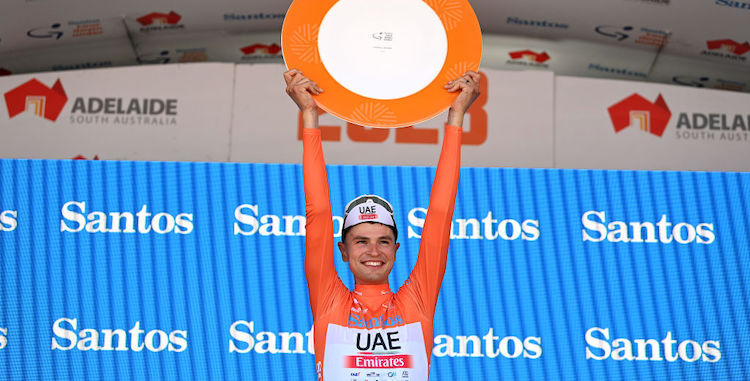 Jay Vine wins Tour Down Under!

Jay Vine won the Tour Down Under on Sunday. Roughly two weeks ago we wrote a story about the Australian. How he turned himself from a Zwift cyclist to the Australian champion time trial. The 27-year-old Australian of UAE Team Emirates successfully defended his leader’s jersey in the final stage to Mount Lofty. In the game of seconds that the Tour Down Under often is, Vine had to watch his step on Sunday. Nevertheless, the classification riders only stirred in the final phase of the rather difficult stage.

Simon Yates turned on and only Ben O’Connor and Vine could follow. Milan Vader briefly led the chase, but the Jumbo-Visma rider failed to bridge the gap with the leading group. For a moment Vine seemed to take the stage victory, but it was Yates who still trumped the Australian. The first part of the peloton had now approached the leading group within a few seconds. The attentive racing Vine therefore held out and is the first winner of the Tour Down Under since Richie Porte in 2020. Due to the corona pandemic, the stage race has been canceled for the past two years.

In the final standings, Vine, who did not win a single stage, has an 11-second lead over Yates and 27 seconds over number three Pello Bilbao. At place 25, Vader is the highest ranked Dutchman. The Tour Down Under was the first of a total of 35 World Tour races in 2023. The year couldn’t have a better start for Jay Vine. It’s going to be very interesting to see how he can follow up on this massive start.